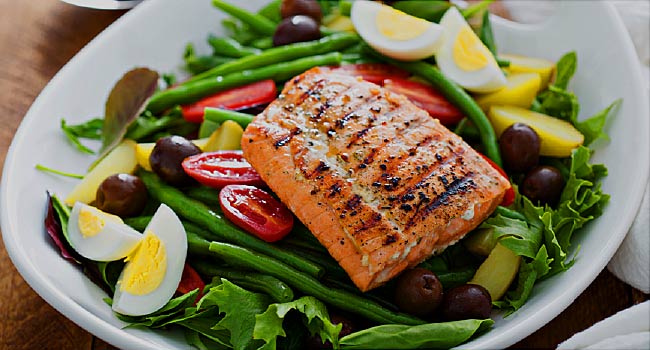 Cancer is one of the leading causes of death worldwide.

But studies suggest that simple lifestyle changes, such as following a healthy diet, could prevent 30–50% of all cancers.

What’s more, nutrition is thought to play an important role in treating and coping with cancer.

This article covers everything you need to know about the link between diet and cancer.

Eating Too Much of Certain Foods May Increase Cancer Risk
It’s difficult to prove that certain foods cause cancer.

However, observational studies have repeatedly indicated that high consumption of certain foods may increase the likelihood of developing cancer.

Processed foods that are high in sugar and low in fiber and nutrients have been linked to a higher cancer risk.

In particular, researchers have found that a diet that causes blood glucose levels to spike is associated with an increased risk of several cancers, including stomach, breast and colorectal cancers.

It’s thought that higher levels of blood glucose and insulin are cancer risk factors. Insulin has been shown to stimulate cell division, supporting the growth and spread of cancer cells and making them more difficult to eliminate.

In addition, higher levels of insulin and blood glucose can contribute to inflammation in your body. In the long term, this can lead to the growth of abnormal cells and possibly contribute to cancer.

This may be why people with diabetes — a condition characterized by high blood glucose and insulin levels — have an increased risk of certain types of cancer.

For example, your risk of colorectal cancer is 22% higher if you have diabetes.

To protect against cancer, limit or avoid foods that boost insulin levels, such as foods high in sugar and refined carbs.

The International Agency for Research on Cancer (IARC) deems processed meat a carcinogen — something that causes cancer.

Processed meat refers to meat that has been treated to preserve flavor by undergoing salting, curing or smoking. It includes hot dogs, ham, bacon, chorizo, salami and some deli meats.

A large review of studies found that people who ate large amounts of processed meat had a 20–50% increased risk of colorectal cancer, compared to those who ate very little or none of this type of food.

Another review of over 800 studies found that consuming just 50 grams of processed meat each day — around four slices of bacon or one hot dog — raised the risk of colorectal cancer by 18%.

However, these studies often don’t distinguish between processed meat and unprocessed red meat, which skews results.

Several reviews that combined results from multiple studies found that the evidence linking unprocessed red meat to cancer is weak and inconsistent.

Excess buildup of these harmful compounds can contribute to inflammation and may play a role in the development of cancer and other diseases.

Certain foods, such as animal foods high in fat and protein, as well as highly processed foods, are most likely to produce these harmful compounds when subjected to high temperatures.

Several observational studies have indicated that high dairy consumption may increase the risk of prostate cancer.

More research is needed to determine possible cause and effect.

Theories suggest that these findings are due to an increased intake of calcium, insulin-like growth factor 1 (IGF-1) or estrogen hormones from pregnant cows — all of which have been weakly linked to prostate cancer.

Higher consumption of foods rich in sugar and refined carbs, as well as processed and overcooked meat, can increase your risk of cancer. In addition, higher dairy consumption has been linked to prostate cancer.

Being Overweight or Obese Is Linked to Increased Cancer Risk
Other than smoking and infection, being obese is the single biggest risk factor for cancer worldwide.

It increases your risk of 13 different types of cancer, including of the esophagus, colon, pancreas and kidney, as well as breast cancer after menopause.

In the US, it’s estimated that weight problems account for 14% and 20% of all cancer deaths in men and women, respectively.

Excess body fat can contribute to insulin resistance. As a result, your cells are unable to take up glucose properly, which encourages them to divide faster.
Obese people tend to have higher levels of inflammatory cytokines in their blood, which causes chronic inflammation and encourages cells to divide.
Fat cells contribute to increased estrogen levels, which increases the risk of breast and ovarian cancer in postmenopausal women.
The good news is that several studies have shown that weight loss among overweight and obese people is likely to reduce cancer risk.